History of the monastery 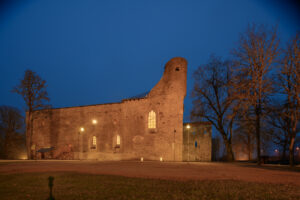 The Padise Monastery traces its origins back to landholdings at Padise, in the area of Määraküla and Harju-Risti, owned by its predecessor, the Daugavgrīva (German: Dünamünde) Monastery, located at the estuary of the Daugava River in Latvia. After the closure of Daugavgrīva Monastery in the early 14th century, a new monastery was established at Padise.

The construction of the Padise Cistercian monastery began in the 14th century and lasted more than 200 years. Erik Menved, King of Denmark, authorized the construction of a grand fortified monastery complex in 1305. Construction began in 1317. The Padise Monastery was founded near Estonians' ancient castle of Padise on the Simmiku or Kloostri River in a wooded and sparsely inhabited part of the historical Harju County in the early 14th century. The Cistercian Order sought to build their houses in remote places in the woods or marshlands, far from towns and densely populated areas, where it was possible for monks to devote themselves entirely to religious life and where the new lands needed to be cultivated and settled. Male Cistercian monasteries were, as a rule, situated in places where there was a supply of running water as water was used to operate gristmills to grind grain into flour, and other mills. Preferably, they were built on a site near the river where a road connecting towns crossed the river. Thus, the historical Tallinn-Haapsalu Road crossing the ford at Padise, approximately 50 km from Reval (Tallinn), was well suited.

Unlike the mendicant orders (Dominicans, Franciscans, etc.), who founded their centres in cities and whose aim was to engage with ordinary people, the Cistercians placed great stress on isolation. Ordinary people were not allowed to enter the monastery, not even the monastery church and, in the same way, the Cistercians, as a rule, were not allowed to go out into the world, except in cases of dire need. For local people a small church or chapel was built outside the monastery walls. At Padise the remains of a small church, probably dedicated to St. Anthony, were discovered in 2009, when a bike road was built between the big road and the entranceway to the manorial estate. There was a graveyard close by where local people were buried.

By the late Middle Ages, many villages from Vasalemma to Nõva had come into the ownership of the Padise Monastery. A separate large tract of land possessed by the monastery was located near Raasiku in East Harju county. In the 14th century the Padise Cistercians had landholdings near the present-day Helsinki and Vantaa, in South Finland, then part of the Kingdom of Sweden, in addition to fishing rights in the Vantaa River. Although Cistercian monasteries were mighty buildings, the monks lived ascetic lives between them, with a few simple clothes and poor and one-sided food.

We have minimal knowledge of the history, daily life and buildings of the Padise Monastery during approximately two and a half century in written records. There is a short mention in the chronicles that in the course of the St. George’s Night Uprising in 1343 the peasants from Harju county killed 28 monks and burnt the buildings. No other tragic events are known to have happened before the Livonian War.

The Livonian War, which broke out in 1558, brought about drastic changes at Padise. In 1559 the Livonian Order dissolved the monastery and used the monastic buildings as a fortification. It was occupied several times by different enemy forces. Finally, after a lengthy siege of the monastery, the Swedish troops were able to seize the Russians in 1580. The monastery, which had been severely damaged in the war, remained in ruins for decades. The former lands of the monastery became the property of the Swedish state.

A new page in the history of Padise Monastery was turned in 1622, when Gustav II Adolphus, King of Sweden, granted the former monastery land to the burgomaster of Riga, Thomas Ramm. The new owner made his abode right inside the walls of the former Padise Monastery. New openings for doors and windows were cut, wall partitions, stoves and fireplaces built, and the formerly high-ceiled church divided into two levels by an inserted ceiling. Some decades later, major upgrades were completed. In the heart of the manor there was a decorative garden with a small pond. In a sense, the 17th century seems to be the most brilliant in the history of the Padise manor.

The Great Northern War in the early 18th century did not leave Padise untouched, but even more devastating was the outbreak of the plague epidemic in 1710 that felled local people: in some villages even three quarters of the residents were killed by the disease. At all, this century was unfortunate for Padise. In the 1760s Padise was devastated by successive fires. First the barns burned in 1763 and then the fire that broke out on 4 May 1766 caused even more damage. Due to the strong wind the fire spread quickly and destroyed the newly expanded and renovated mansion. After the fire, Thomas von Ramm Jr.  abandoned the former monastery. The new manor house was built some hundred metres to the North East. The Padise Manor remained in the hands of the von Ramm family until Estonia became independent.

Councillor Reinhold Clas Gustav von Ramm was the last private owner of the manor. The lands were expropriated in 1919, according to the land reform act passed by the Estonian Constituent Assembly. After gaining independence, the young Republic of Estonia faced several tasks, among them was the management of local architectural heritage. In the beginning years, there were few visible results because of limited funding, neither was there any common understanding which historic buildings are worthy of preservation. Traditionally, the archenemies of the Estonian people were the Teutonic knights and the manorial lords, for this reason the wish to preserve medieval or Baroque or Neoclassical buildings was not easily comprehensible. In the 1930s the opinions as well as the economic possibilities were slowly changing. The first conservation work was carried out at Padise in the 1930s. Again, for a long time interrupted conservation and restoration work resumed in the mid-1955s. After shorter and longer breaks, the Padise Monastery is now preserved.

One of the most important recent works is an international project for further planning of the conservation works of Padise Monastery in 2010-2012. The project was carried out together with the Vantaa City Museum to plan further conservation of the Padise Monastery, in which not only archaeologists but also students and researchers from the universities of Tallinn, Tartu, Helsinki and Turku participated.

During the conservation work, carried out in the monastic complex in 2018–2019, archaeological monitoring was employed. During the monitoring empty stone funeral boxes were found and the foundation of the main altar in the church floor was discovered. Plaster fragments with blue and red paint stripes were discovered in the church ceiling, stripes of paint were visible on the transverse arches as well. In the floor of the undercroft chapel foundations of two altars and a burial were found. Find out more about new discoveries from here.

Any cookies that may not be particularly necessary for the website to function and is used specifically to collect user personal data via analytics, ads, other embedded contents are termed as non-necessary cookies. It is mandatory to procure user consent prior to running these cookies on your website.